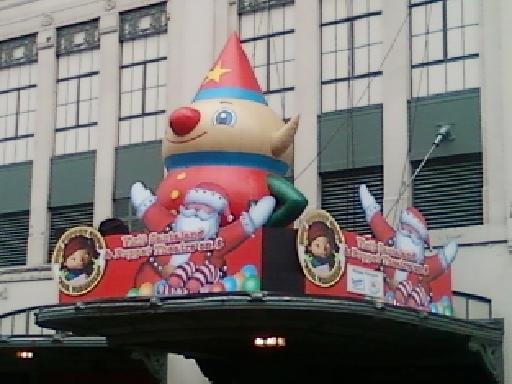 Everyone in New York City knows that if you want to see Santa, you have to go to Macy’s Herald Square store.  The big man arrives at the tail end of the Thanksgiving Day Parade and stays in this little transplant of the North Pole in New York City until Christmas Eve, when he leaves to make his appointed rounds.  We’ve been going to see Santa since my darling daughter was a year old.  When she was fifteen years old, she said “One more year, Mom.  It feels a little silly, but one more year.” She’s twenty-five years old now, way past silly, and we just go!

I’ve never enjoyed the early Christmas onslaught.  For me, Christmas preparations begin around December 21st.  I do my Christmas shopping, menu planning, house cleaning, gift wrapping, and everything else associated with the holiday starting then.  Our trips to Santaland usually take place the weekend before Christmas.  Right on schedule, we went to visit Santa: darling daughter, doting uncle, and I. 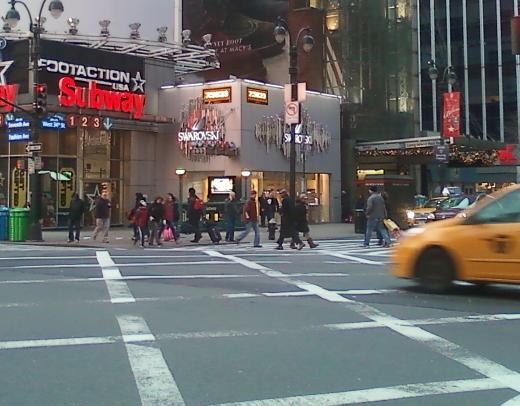 Before the ubiquitousness of texting, we used to just stand inside the south-west corner entrance to Macy’s, the one by the Men’s Department, staring at the ticking digital clock across the street until the errant party arrived. Darling daughter would gleefully sneak up on doting uncle and scare the living daylights out of him.  It never grew old.  Now we just text:

Me:“We’re heading to the subway.”

Daughter: “We’re waiting.  The munchkins are showing up in droves!”

Yeah, we actually spell the words out in our texts.  That’s how we roll!

We make a mad dash to the elevators through the Men’s Department.

What floor is it again? Eight.  It’s the Eighth Floor!

We get off on Eight, triumphant that we got it right as we gleefully spot the Santaland sign.

Twenty-five years of doing this and we got it right.  What a surprise!

Because we’ve done this so many times, our walks through Santaland are also a walk through Memory Lane:

Oh, look, the engine is new!

We step into the train, and check out the “scenery” passing by the “windows.”

That looks like Central Park!  We must be getting closer to the North Pole:

Uncle: Why aren’t you bouncing up and down with the moving train?

Daughter: Because I’ve learned to keep my balance on the lurching subways!

Finally (not really), we “arrive” in Santaland. We make our way through the familiar route, noting the displays.

Well, it’s always been there, but it used to have two faces, The Holly and The Ivy. 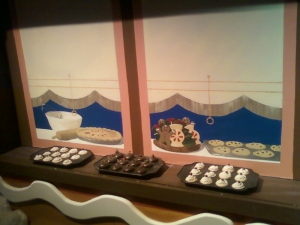 THAT’s new!  We never had a bakeshop before!

The snow-people choir is new!

I miss the “Naughty and Nice Meter!”

Oh, look!  Rudolph and Clarice on the roof, over there! 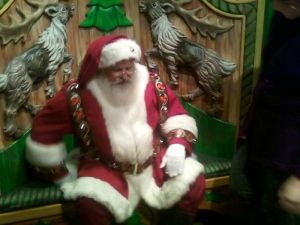 Soon, we’re in the presence of Santa Claus himself and 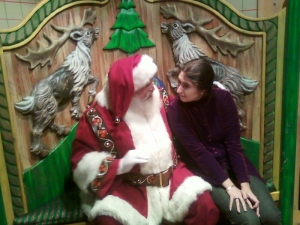 darling daughter proceeds to whisper her secret wishes to him, as she does every year!

Our visit satisfactorily concluded, we adjourn to the 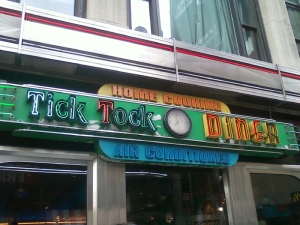 Tic Toc Diner on the corner of 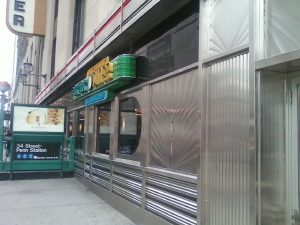 Ninth Avenue and 34th Street for much-needed, and well-deserved, sustenance!

Another successful beginning of our holiday merriment!

This work is licensed under a Creative Commons Attribution-NonCommercial-NoDerivs 3.0 Unported License.